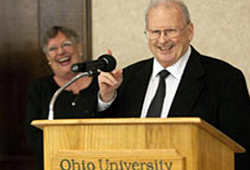 R. Smith Schuneman and Patricia Schuneman are self-declared media lovers who have given generously to media studies at their alma mater. At Ohio University, Smith received his bachelor's and master's in photography and journalism, and Patricia earned her bachelor's in education. They moved to Minnesota, where Smith earned his doctorate in mass communication research and where he taught at the University of Minnesota as a professor of journalism for sixteen years. His specialty was Photographic Communication. They then co-founded a business, Media Loft, Inc., which specializes in producing multimedia presentations for corporations. The Schunemans built Media Loft into a company with some 50 employees, won a number of high profile clients, and took many national awards for their work. They worked at Media Loft, Inc. for two decades, until selling it to an employee trust and then retiring from the board in 2001.

In their retirement, the Schunemans decided to give back to their alma mater in a way that allows them to enjoy the fruits of their charitable gift. While at the University of Minnesota, the Schunemans had collaborated to present a symposium on visual communication, which brought together photographers, art directors, filmmakers, editors, and publishers yearly for seven straight years to discuss changes in print media during the 1970s. Building on this model, and inspired by contemporary media issues, Smith and Patricia established the Schuneman Symposium on Photojournalism and New Media at Ohio University in 2009.

The subject of the symposium is not only of personal interest to the couple, but it is also of particular contemporary relevance. Since the Internet and other new media compete for readership and market share with traditional mass media, the rise of new media has caused a crisis for traditional journalistic forms and norms. Among contemporary problems, the Schunemans are concerned about the decline in professional journalistic standards and the fracturing of readership into partisan blocs. They see their symposium as a means to discuss the challenges associated with technological change in mass media and explore potential solutions.

The Schunemans funded the Symposium through a charitable lead trust. A charitable lead trust produces a stable annual income, which is donated to The Ohio University Foundation to pay the Scripps School of Journalism for the costs of each annual conference. The trust will pay for a total of fifteen symposia, after which the remainder will pass to the Schunemans' beneficiaries.

The charitable lead trust has a number of benefits, financial and otherwise. It reduced the Schunemans' tax burden in the year of the gift. Just as important, the Schunemans are able to enjoy their charitable donation by attending the symposium every year, which they find productive and intellectually stimulating. The Schunemans recommend a lead trust because it allows donors to enjoy their gift, as opposed to donating in one's will, and the university receives the gift sooner.

The Schunemans can also feel good about doing good for their alma mater. The E.W. Scripps School of Journalism and the Ohio University community reap the benefits of the gift. In spring 2010 the second annual symposium was held, and approximately 250 students attended the morning and afternoon sessions, while 400 students attended the evening session. By addressing pressing contemporary issues, the symposium enriches media studies at Ohio University and contributes to an important discussion about the changing role of the media in our democracy.

The Schunemans made a creative charitable gift to The Ohio University Foundation in an area of personal interest, and they have enjoyed the results. If you are interested in giving to The Ohio University Foundation, or if you have questions about how a charitable lead trust could work for you, please contact Kelli Kotowski, Executive Director of Development for Gift Planning, at (740) 597-1819, toll free at (800) 592-3863, or send an email to: kotowskk@ohio.edu.