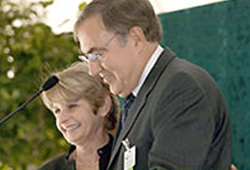 Charles Stuckey, Jr. understands the importance of education. Mr. Stuckey worked several jobs while attending the OU-Lancaster campus and, later, the Athens campus. He earned a Bachelors of Science in Mechanical Engineering in 1966, which prepared him for a career in the computer industry. Upon graduation, he worked for IBM in sales positions. He later worked for Control Data Corporation in management positions, and finally he served as president and CEO of RSA Security, a company that specializes in data and network security. He recently retired from this position but continues to serve on the board of directors for several companies.

While he enjoyed professional success, Mr. Stuckey has given generously of his time and treasure to support his alma mater. He began to reconnect with the Russ College of Engineering & Technology by returning to campus to give lectures. Since then he has served on the OU Board of Trustees and the OU Foundation Board of Trustees. He and his wife, Marilyn, have endowed a named professorship in the School of Electrical Engineering and Computer Science and have established a Cutler Scholarship. Most recently, he has served as the Chair of "The Promise Lives" Campaign, Ohio University's latest fundraising initiative.

Mr. and Mrs. Stuckey tend to support charities in the fields of education and health care. In discussions about a proposed new engineering building, an integrated learning and research facility, Mr. Stuckey found an initiative that combined these charitable priorities. The building, which would become the Academic and Research Center (ARC), sought to provide an interdisciplinary space that would encourage collaboration between engineering and medical researchers and educators.

Mr. Stuckey believes the ARC will promote interdisciplinary education and research. "This building will help to break down the communication and collaboration barriers that exist in higher education. It will break down the discipline silos," Mr. Stuckey said at the ARC dedication. "Hopefully this facility will just be one step in enhancing collaboration across the entire university." As a corporate executive, Mr. Stuckey saw first-hand the misunderstandings between engineers, accountants, marketers, and other corporate functions. ARC courses, designed around practical, real-life, team engineering projects, are designed to promote communication between fields and to serve as management and leadership training for future engineers. While innovative classes will prepare well-rounded employees, interdisciplinary research will explore new medicines, develop new treatments and delivery methods, and advance biomedical technology.

Perceiving the potential of the ARC to enhance higher education and promote public health, Mr. and Mrs. Stuckey committed a lead gift to the project. Though the project was originally discussed as a much smaller building, the Stuckeys' lead gift catalyzed a larger and more ambitious project. The Stuckeys' commitment to a lead gift then enabled the university to leverage additional funding from the Osteopathic Heritage Foundation. The Stuckeys are pleased with the opportunity to support two of their charitable priorities in a fiscally responsible manner.

The Stuckeys contributed to the ARC through two Charitable Remainder Trusts: a Charitable Remainder Unitrust (CRUT) and a Charitable Remainder Annuity Trust (CRAT). Both gift vehicles enabled the Stuckeys to draw upon appreciated securities while saving on potential capital gains taxes. Since Mr. Stuckey went into business for himself, and did not have the benefit of a large corporate pension plan, he and his wife sought to provide themselves with a stable flow of income for retirement. While the gift vehicles differ in that the CRAT provides a guaranteed rate of return and the CRUT's rate of return is revalued annually, both provide the Stuckeys with a secure retirement income while accomplishing their charitable objectives.