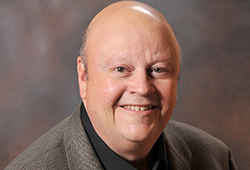 As a freshman in 1967, Jim was welcomed to Ohio University by the OHIO football coaches and upperclassmen while attending summer practices. From the very beginning, Jim was devoted to the football team. He believed they had been extra kind to give him a work-study job as the equipment manager. As a result of this job, Jim was provided with the books needed for his classes. Jim went on to have very a successful career with Raymond James Financial Services in Cincinnati.

To express his gratitude and assure that his legacy has a tremendous impact on future generations, Jim and his wife Suzi decided to establish a bequest to benefit various Ohio University programs. A bequest to Ohio University enabled Jim to help many deserving future Bobcats and, thereby, establish a meaningful and lasting legacy.

A shy teenager from Zanesville, Ohio, Jim saw Ohio University as a land of opportunity, where he transformed himself into a campus leader and the 1971 Senior Class President.

"OHIO's long history, established alumni base, energized faculty, and Appalachian roots provide a truly unique 'launching pad' for opportunity," said Jim. Jim and his wife, Suzi, hope to help other students grow as a result of the opportunities that OHIO provides.

Jim wanted to assure that both his active and future gifts were designed to help OHIO continue to be a transformational environment for students, the Athens' community, and the region. His philosophy matches the vision of OHIO, which seeks to be the nation's best transformative learning community.

"The Ohio University residential learning experience is truly special and we hope to help it continue to be available," says Jim on his legacy.

Jim finds that gift planning is a way for donors to maximize their giving to Ohio University. He has generously contributed to Athletics, The Schey Sales Centre, and the Department of Economics. This allowed Jim to shape the OHIO experience for athletes, coaches, students, professors, and administrators in a measured way.

"Through creative thinking and directed giving, we can make a difference that hopefully, will pay OHIO back for much of what we received," Jim said.

If you are interested in learning more about how to create a legacy at Ohio University, please contact Kelli Kotowski at (740) 597-1819 or kotowskk@ohio.edu.

*Jim Wycoff passed away on August 11, 2013. He was devoted to "his beloved" Ohio University and the 2013 the Alumnus of the Year Award was given to him posthumously at Homecoming during the Gala on Friday, Oct. 11th.