One OHIO alumnus' generosity extends to OHIO and his community 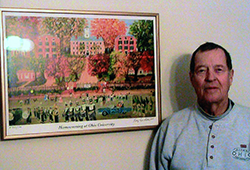 Koonts began a 20-year commitment to Yankee Trace Golf Course in Centerville in 1985, repairing greens, filling divots, and working as a player assistant throughout the day. In April 2015, his hard work and dedication were honored when he was recognized as volunteer of the year.

Koonts, MED ’67, devoted 28 years to counseling at Fairmont High School in Kettering, Ohio, and enjoyed every minute of spending time with the students he loved so much. His chosen profession is a testament to his drive to give back. This passion is demonstrated in the John Koonts Counselor Scholarship, which supports graduate students enrolled in The Patton College of Education who are earning their master’s degree in counselor and guidance education and who reside in one of Ohio’s 32 Appalachian Counties.

Koonts said he understands how difficult it is for Appalachian students to get jobs and work through high school to help pay for college. His mentor and favorite professor, Richard Green, “saw in him what he didn’t see in himself.” As the only student from Appalachia in the class of 1967, Green “took me under his wing” and guided Koonts through the start of his new career, he said. The John Koonts Counselor Scholarship is a way for Koonts to pay back the kindness and generosity shown to him so many years ago.

“I know the resources aren’t there for the high schools, and I want to give (students) the opportunity to be a Bobcat,” Koonts said.

Koonts supports OHIO in other ways. He and his wife, Patricia, are season ticket-holders for both OHIO football and men’s basketball teams. They attend every game they can, and when they can’t attend, Koonts donates the tickets to Vinton County (Ohio) High School. The high school’s principal Kevin Waddell gives the tickets away to students as a reward.

Veterans get a ticket to ride

During his undergraduate time at the University of Dayton Koonts was a ROTC second lieutenant and served as a medical supply officer in Fort Louis, Washington. One day Koonts saw an ad in the local paper that sought volunteers with motor homes who would transport World War II veterans to the Washington D.C. WWII Memorial. He jumped at the chance. Since in 2008, Koonts has taken up to 28 veterans on a three-day trip to see the memorial two to three times a year. He calls the effort a rewarding one because of the appreciation he receives.

“It was probably one of the most emotional, most gratifying things that I have ever done,” he said. “We took them over there and coming back in the motor home they would say ‘this was the best day of my life.’”

Koonts recently reflected on his fond memories of being a Bobcat, memories that fill a big place in his heart.

“It’s been a great school for me and I’ll continue to support it,” he said. “I have tremendous loyalty to Ohio University.”