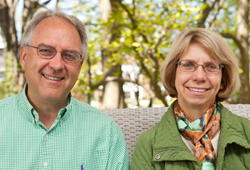 While the Honors Tutorial College has increased its enrollment and expanded its programs of study during its 40-year history, one hallmark has remained the same. Students develop a strong connection to the college. For one couple who entered HTC during its formative years, that connection sparked a tradition of financial support for high-achieving students.

"HTC is a place for people who are really interested, but may be a little bit quirky or a little bit different, to really have a chance to pursue their interests and to pursue the kind of an education they want to put together," Bruce said. "And still do it in a small college setting within a large university with a lot of resources."

The Breges also cite the connections that HTC can foster for its students and alumni as a reason they support the College so readily.

"It has both the breadth across the majors, so you get to know a lot of different people, and it has the community through the years, and the data today will tell you connections are what really matter," Laura said.

After graduating from Ohio University in the late 1970s, the Breges moved to Chicago before settling in the San Francisco Bay area, where they live now, all the while supporting HTC.

Laura became involved with the Board of Visitors about 15 years ago, and Bruce is currently leading the HTC Promise Lives Campaign. The two have also been longtime financial supporters of HTC's related programs, like the Office of Nationally Competitive Awards.

"We were involved at the beginning of ONCA, it connects young people who have to go through complicated processes and have to do it over a long period of time with faculty members who can help guide them," Laura said. "So when they came up with the idea it really resonated with us, so we've been longtime financial supporters of that."

This year, the Breges took their financial support for HTC and ONCA one step further. They donated $100,000 to help fund the HTC Research Apprentice program, which enables faculty who have served as HTC tutors to hire an undergraduate full-time for 10 weeks to assist with research during the summer.

"Within the college we are supporting research apprenticeships because there are so many things that students are interested in within their areas of study," Laura said. "And you need money to be able to travel and pay conference fees and do summer research, so that's where our money is going in the college."

They also made a $100,000 donation to ONCA that will encourage other alumni and friends to support the office's efforts to match outstanding students with life-changing competitive opportunities. They are asking for $50,000 to be donated to match their gift.

With the hope of connecting more alumni to current HTC students, Bruce and Laura Brege continue to encourage people in supporting the endeavors of the College.