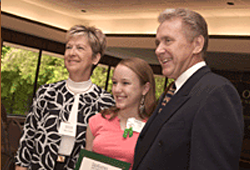 Years ago, a man shared the belief with Larry A. Gates that "People by nature are not generous." Mr. Gates, a Chillicothe native, chose a different path - embarking instead on a lifetime of philanthropy.

In 2004, Mr. Gates and his wife Mary began helping Ross County students realize the dream of a college education by establishing a major scholarship fund, which eventually will total more than $10 million. Administered by The Ohio University Foundation, The Gates Foundation - Ross County Scholar's Fund is paving the way to a college degree for students who wouldn't otherwise have had that opportunity.

"Living on the edge of Appalachia, the needs are great," says Mr. Gates.

"There are thousands of families who don't have the ability to instill the need for higher education in their children, or to encourage them to seek a better way of life," says Mr. Gates.

In 2006, 15 students received Gates scholarships and the opportunity to beat these odds. Recipients attend the college or university of their choice, with at least 51 percent of the awards being made to Ohio University students. This year, recipients are attending nine universities.

The Gates scholarship is awarded to students who have the ability and ambition to succeed in college, but lack the resources to attend.

"I wish we could give every one of the applicants something," says Mary Gates. "There is so much need. I wish more parents were in a position to stress education."

The Gates scholarship is funded through a Donor-Advised Fund, which allows donors involvement in the grant-making process. To instill and nurture philanthropic values, Larry and Mary Gates have included their daughters, community members, and others in the scholarship selection process.

"The needs are great, and in total they can be overwhelming. We are left to accept the fact that no one individual, or no one program, holds all the answers to the many challenges that confronts us. We are left to answer the question 'What resources do I choose to share?'" says Mr. Gates. "We believe in the incredible opportunity that we all have to put things in place today that will help generations yet unborn."

Because the Gates scholarship is endowed, the funds are invested and a portion of the earnings used each year. The rest is reinvested, ensuring that the resources will be there in perpetuity.

"We wanted to do something to help students today," says Mr. Gates. "Next fall the first class of (Ross County) Scholars will be seniors in college. We've been with them since they were freshmen; it's been a wonderful experience to be a small part of their families. We also wanted to do something that would go on forever, that allows our daughters to be involved now and when we're gone? then, our grandchildren."

Mr. Gates retired as senior vice president for human resources and administration with Philip Morris Companies in 1998. In that position, he was responsible for worldwide human resources for a multinational corporation employing 160,000 individuals in 180 major markets around the world. He graduated from Chillicothe High School in 1956, Northeastern State (Okla.) University in 1964 and joined Philip Morris in 1967.

Living and working in Europe and experiencing life in most of the major countries of the world, Mr. Gates witnessed an increasing emphasis on education.

"Living on the cusp of Appalachia you see the disparity. Many of our young people have no understanding of the impact of a global economy and how discouraged they may become with their life choices without university training," says Mr. Gates. "We need to help our young people understand that this is their competition. I believe that education and the excitement of learning is one of the most important things that we can share with someone. And all the while asking ourselves the question: 'What resources do I chose to share?'"

Jennifer Bowie (BSJ '94, MSC '99) is Director of Development for the Annual Fund and Communication at Ohio University.