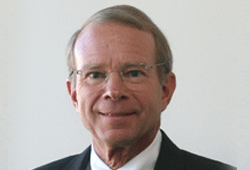 David Pidwell has a personal philosophy that guides his giving. He believes that life is broken down into three phases. First is Learning, when an individual develops skills and knowledge to prepare for a balanced life. Second is Doing, when an individual employs that knowledge, using the tools gained during first phase to reap the benefits of one's efforts. Third is Giving, when an individual uses the resources one has acquired (including knowledge, skills, and financial resources) to give back to those who are in the learning phase of life's development.

Mr. Pidwell attended Ohio University, and this began a formative time in his life. While in Athens he dedicated himself to becoming an engineer. He received his Bachelors of Science in Electrical Engineering in 1969 and his Masters of Science in Industrial Systems Engineering from Ohio University in 1970. Moving on to Stanford University, he worked toward a PhD in Engineering Economic Systems. It was at this point that Mr. Pidwell transitioned to the second phase of his life, his career.

Mr. Pidwell left Stanford to join a young company, ROLM Corp., which specialized in designing computers for military applications and, later, for use in telecommunications. He spent sixteen years making ROLM an important player in Silicon Valley, and then sold the company to IBM. In 1987, Pidwell founded Rasna Corp., a mechanical design automation software company. As President and CEO, he made Rasna one of the fastest growing private companies in the nation until he sold it in 1995. In 1996, he became a Venture Partner at Alloy Ventures, a venture capital firm in Silicon Valley, where he currently works. He also sits on the board of directors for several companies, and serves on the Board of Trustees for The Ohio University Foundation.

After a successful and profitable career, Mr. Pidwell believes it is his responsibility to give back to higher education. Using the knowledge of forty years spent in Silicon Valley, the experience of starting companies based on new technologies, and the financial resources from his successful ventures, Mr. Pidwell aims to recreate the remarkable growth of Silicon Valley in southeast Ohio. Toward this end, Pidwell transferred stock as a gift to The Ohio University Foundation in support of a new Center for Entrepreneurship at Ohio University. The Center for Entrepreneurship is a collaborative effort between the College of Business, the George Voinovich School of Leadership and Public Affairs, the Technology Transfer Office, and other Ohio University offices. The Center will train students in entrepreneurship, will advise professors how to develop new research into marketable products, and will create a network of professional resources for small businesses in southeast Ohio.

Mr. Pidwell chose a stock transfer as his gift vehicle because the gift avoided capital gains taxes and maximized the size of the gift. Moreover, since the Center for Entrepreneurship has pressing needs now, the stock transfer allowed Mr. Pidwell to get involved in real time. Through a stock transfer, Mr. Pidwell helped give life to his vision of promoting a culture of entrepreneurship at Ohio University and in southeast Ohio. The Center for Entrepreneurship is now open, teaching classes, developing a mentorship program, and ready to send students to get hands on learning in regional businesses. As a result of Mr. Pidwell's gift, the Center is about to hire a director, and the next year will see a number of young venture business evolving in southeast Ohio.